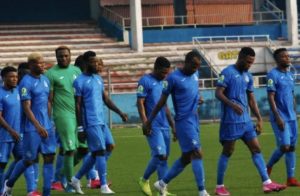 NPFL side Enyimba coach, Fatai Osho, is eying maximum points against South Africa’s Orlando Pirates in its final CAF Confederation Cup Group A fixture on April 28 at a yet to be decided venue.

The Nigerians walk a tight rope after losing 1-0 to Libya’s Al Ahli Benghazi in their last Group A match at the Martyrs of February Stadium, Benghazi on Thursday.

Forward Muttasem El Talib scored the only goal of the encounter in the 40th minute, while the Nigerian team finished the game with 10 men after centre-back Timothy Danladi was sent off in the 74th minute.

The result leaves the two-time CAF Champions League winners third in the table with six points after being leapfrogged by the Libyans, who are now second on seven points.

Enyimba need a win against Pirates in their final group game to scale through to the next phase, while a draw may see them exit the competition, depending on the result of the other group game between Setif and Ahly in Algiers.

“You look at that group and everyone still stands the chance to go to the quarter-finals,” Enyimba coach Osho said. “I had said it that the group would go to the last day. Every team is competing very well, what we need to do right now is ensure we get our maximum points against Pirates and see what happens in the other venue.”

On the defeat to the Libyans, the gaffer said: “It was quite an improvement on our part. We knew we needed a good result here to stand a chance of going through to the quarter-finals. The players are aware of this and they worked hard.

“After that goal, we tried hard to see what we could do to rescue the situation, the red card also changed the narrative to some extent. Even after that, we pushed to see if we could salvage the game, unfortunately, we couldn’t.”