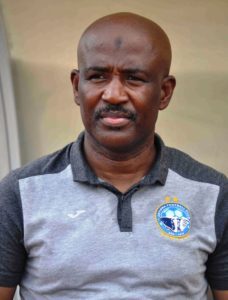 There is the school of thought that believes Enyimba have earned themselves an easy CAF Confederation Cup quarter-final opponents in Rwanda’s Rayon Sports, but the club’s head coach Usman Abdallah holds quite a different view and has “respect” for the achievement of the Kigali club.

The 44-year-old Enyimba trainer told npfl.ng that the quarter-finals of the competition presents another hurdle to scale and acknowledged that all of the eight clubs vying for places in the last four earned their stripes and should not be underrated.

He specifically stated that the People’s Elephant will “pay attention to every little detail” concerning their opponents.

“This competition is in the quarter-final stage and any team in this stage must have gone a long way to get here. So none of the teams got to the quarter-finals by chance. It means all of the eight teams worked to get this stage.

“For me, I am treating our opponents the same way like we have done against other opponents, and with respect. So my mentality going into this fixture is that every team in the quarter-finals are of same pedigree irrespective of past or present records. This is no time to underrate any opponent. We will prepare well for this fixture and pay attention to every little detail too,” Abdallah said.

Abdallah is however focused on guiding Enyimba into the semi-finals.

“The most important thing now is to win and ensure we get to the semi-finals, and from there we will wait for the next opponents. But now the focus is the quarter-finals against our opponents (Rayon Sports),” he said.