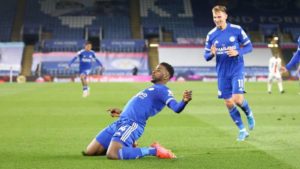 Legendary England striker Gary Lineker has confessed his love for rave of the moment Kelechi Iheanacho, who banged in a wonder goal in Leicester’s 2-1 win against Crystal Palace on Monday night.

Leicester continued their bid to cement their top-four place with the win against Palace thanks to goals from Iheanacho and Timothy Castagne.

Iheanacho netted the winner in the 80th minute with a brilliant curler into the top corner after controlling a long pass.

The goal was his 10th in the Premier League this season and his 17th in all competitions.

The win means Leicester stay in third position on 62 points and are four points ahead of fourth-placed Chelsea.

And Lineker, who began his football career at Leicester City, described Iheanacho as a lovely finisher with delightful touch.

He wrote on his verified Twitter handle:”What a wonderful player @67Kelechi is becoming/already is. Such a lovely finisher with a delightful touch and great awareness. Love the fella.”