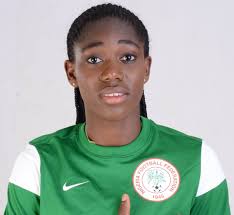 Super Falcons’ Captain and FC Barcelona Femeni forward, Asisat Oshoala, may have found herself on the wrong side of some Nigerians over the ongoing protests calling for the sacking of the Special Anti-Robbery Squad (SARS) of the Nigeria Police.

Oshoala joined several past and present sports personalities to tweet her solidarity with the present struggle to put an end to constant harassment and killings by the security agency.

But the four-time African Footballer of the Year recipient, however “scored an own goal” when she described the country as a jungle in her tweet.

Last Saturday at 9:05 pm, the Super Falcons captain who is one of the most active female footballers on social media tweeted on her verified handle: “#Nigeria is a JUNGLE!!! #EndSARS, EndPoliceBrutality.”

Unfortunately, her tweet became a subject of discussion with many Nigerians sharply divided.

Some of those who felt outraged by her choice of words in describing Nigeria as a jungle, called on the Nigeria Football Federation (NFF) to strip her of the captain’s armband and at the same time make a public apology.

However, some other users of the medium, came to her defence, insisting that if Nigeria is not a jungle men of the SARS will not resort to inhuman tactics in dealing with most youths in the country.

In the early hours of yesterday, precisely at 00:30, the Nigerian star, probably due to pressure from her admirers retraced her step with a fresh tweet, explaining her earlier post.

“I love Nigeria, Nigeria has given me everything even if it wasn’t in the easiest way, that is why I will also give my all in my own little way…make it easier for the next generation. Na all of us gather love this country but not happy #SARSMUSTEND #EndPoliceBrutalityInNigeria,” she tweeted to soften frayed nerves on the social media.

It is however not yet known if the Nigeria Football Federation (NFF) will take further action against her, considering the fact that she was appointed the captain of the senior national women’s team a little over a year ago.

Aside footballing, Oshoala is into modelling and owns a foundation for helping the less fortunate and vulnerable in the society.

Only recently, she was a guest of the Lagos State Governor, Mr. Babajide Sanwo-Olu. The state has promised to give full support to her Foundation as indigene.