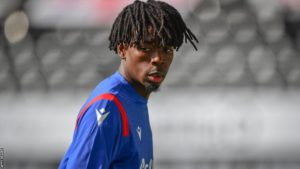 Ex-England youth international Ovie Ejaria is waiting for clearance from Fifa in order to play for Nigeria at senior level.

The 22-year-old Reading midfielder, who spent six years at Liverpool but only made eight senior appearances for the Premier League champions, helped England win the 2017 Under-20 World Cup.

The Nigeria Football Federation president Amaju Pinnick has confirmed that the process for him to swap allegiances has been started.

He is eligible to play for the Super Eagles through his parents, but he will have to wait until next year while Fifa ratifies his switch from England.

Football's world governing body has confirmed "that at the time of writing, Fifa has not cleared the player in relation to the topic you mention."

"As a result, we are not in a position to comment any further nor to give an estimation as to the possible time line."

Ejaria had loan spells at Sunderland and Scottish club Glasgow Rangers before moving to English Championship leaders Reading in August.

He can switch allegiances as he is yet to play for the Three Lions at senior level and coach Gernot Rohr is keen to fortify his midfield, according to his scouts.

He previously trained with the Nigeria under-17 side in 2013 before appearing for the England under-20s in a 3-1 friendly win over Germany in October 2016.

Liverpool's Sheyi Ojo also told the BBC in September 2018 that he would love to represent Nigeria if they approach him.

Ejaria scored three goals and provided five assists in 39 games for Reading last season before joining on a permanent deal in August.

He has scored once in six matches this term for the Championship leaders as he recovers from a muscle injury.