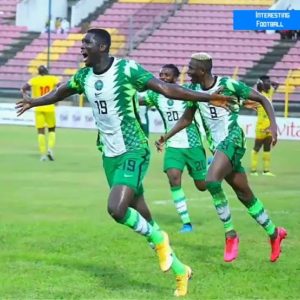 Bundesliga side, Eintracht Frankfurt have been reported to have joined the list of clubs interested in the services of Super Eagles striker, Paul Onuachu, Nigeriasoccernet.com gathered.

As reported by Nicolò Schira, the Europa League champions have initiated talks with KRC Genk for the services of the lanky forward who on several occasions have attempted to move out of Belgium.

However, the Smurfs may budge because Onuachu’s contract expires at the end of next season, and they may be willing to reduce their valuation to avoid losing him on a free.

Onuachu has been in great form fit KRC Genk in the last couple of years, scoring 33 league goals to claim the Jupiler League golden boots two seasons ago.