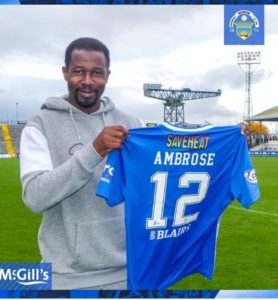 Scottish championship side Greenock Morton FC have signed former Super Eagles defender, Efe Ambrose until the end of the season.

In a welcome note posted on the club’s Official website on Wednesday afternoon, the club which was found in 1874 confirmed the deal.

“Greenock Morton are delighted to announce the signing of Efe Ambrose on a deal until the end of the season.

“Efe joins the team as a highly experienced defender playing almost 200 games in the Scottish Premiership where he won the league with Celtic on 4 occasions and making just over 50 appearances for his national team where he was part of the Nigeria side that lifted the Africa Cup of Nations in 2013.

“Efe will wear the number 12 shirt with his kits now available to sponsor,” the statement reads.

The 34-year-old right back will be joining the 10th club of his professional career.