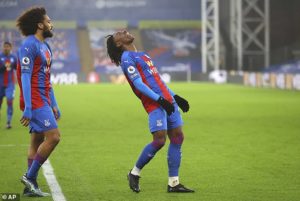 After an inch-perfect free-kick against Leeds and solo wonder goal against Sheffield United, Eze produced something else from his repertoire to net at Selhurst Park once again.

This time it was a clever first touch and shift of weight to send his opponent the one way while he went the other and thumping finish to clinch a narrow but precious victory for Palace.

It was for inspired moments such as that that Palace splashed out £19.5m to sign Eze, one of the Championship’s standout performers last season, from QPR.

There was little between these teams in the table – only goal difference separated them at kick off – and on the pitch with few chances created.

But the England’s under-21 attacker produced the crucial piece of quality in a game of few chances that turned one point into three and just a second league win in 10 for Palace.

Manager Roy Hodgson said: ‘[Eberechi Eze] is a good player and doing very well. I don't think he will be a tap-in man.