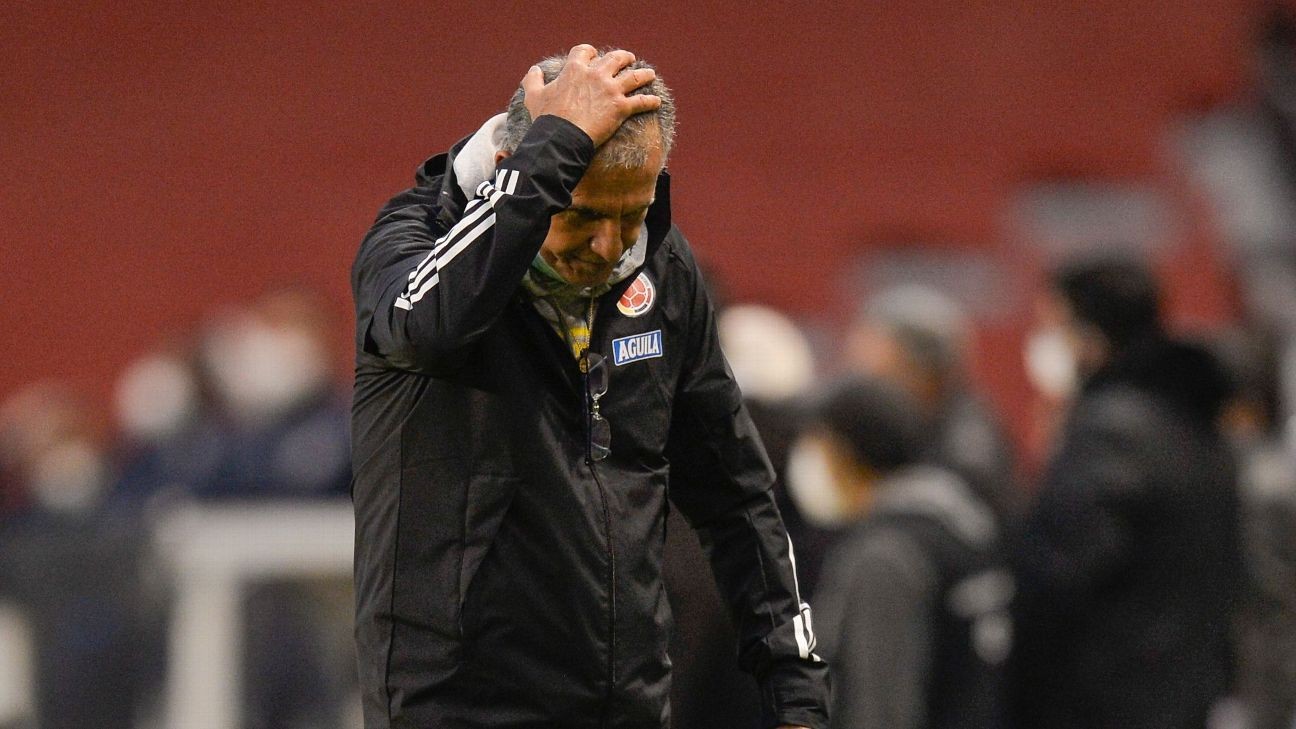 Carlos Queiroz's time in charge of Colombia may be coming to an end. RODRIGO BUENDIA/POOL/AFP via Getty Images

James Rodriguez looked tired as he left the field, substituted towards the end of Everton's 3-2 win at Fulham on Sunday. A little fatigue is hardly surprising. James endured a stressful few days on the other side of the Atlantic.

Colombia had a disastrous doubleheader in South America's World Cup qualifiers, losing 3-0 at home to Uruguay before collapsing 6-1 away to Ecuador. And, according to the Colombian media, relations in the camp deteriorated to such a level that James got involved in a fistfight with a teammate. Original reports suggested that the conflict was with Bournemouth midfielder Jefferson Lerma, but the journalist who broke the story, Javier Hernandez, has since said that the fight was with Atalanta striker Luis Muriel. Both James and the Colombian FA have issued statements denying that any such incident took place, with the Everton player threatening legal action. Hernandez, meanwhile, is sticking by his story, and making it clear that if need be he will reveal his source inside the camp.

Whatever the truth, it would be a surprise if there were no tensions in the dressing room of a team that fell apart in such spectacular fashion, because the Colombian collapse was as unexpected as it was dramatic. The previous month, in the opening two rounds of the qualification campaign, they played an excellent game to beat Venezuela 3-0 and showed grit to come back and secure a 2-2 draw away to Chile.

The coach, the vastly experienced Portuguese Carlos Queiroz, has been in charge for almost two years. Going into the recent games his record was at last reasonable. Indeed, his team had not suffered a competitive defeat, going out of last year's Copa America on penalties after not conceding a goal in four games. In 16 matches, his Colombia had won nine and only been beaten twice: a 2-1 friendly loss away to South Korea, and, the one truly disappointing result, a 3-0 thrashing by Algeria in another friendly in October 2019 -- when, perhaps significantly, midfield anchorman Wilmar Barrios was only introduced when the team were already three down.

So why did it all go so badly wrong now?

Relations inside the camp may not be good, but that can be true of winning sides. Victories can cover up any number of cracks.

Colombia's problems began in October, when they lost both of their first-choice right-backs. Santiago Arias was injured early against Venezuela and Stefan Medina limped off in the first half against Chile. This caused Queiroz to meddle with a vital part of his team structure.

Since the 2019 Copa America, the double function of Juan Cuadrado has made the 4-3-3 system work. When Colombia are defending, he tucks infield on the right of the midfield trio. In attack, he breaks out as a right winger, giving James the freedom to wander infield.

But when Medina was injured, Queiroz found himself without options at right-back. Cuadrado went to play there, but he could not be replaced in midfield.

This was seen all too clearly against Uruguay. The midfield trio -- Barrios anchoring between Lerma and Mateus Uribe -- sat too close together. Uruguay took advantage right at the start, catching Lerma as Colombia tried to play out, and setting up Edinson Cavani to score. Queiroz made a change after just half an hour; taking off Barrios was a gamble, but with an extra striker in Luis Diaz and a switch to 4-2-3-1, Colombia could play forward quicker and put Uruguay under pressure. In the sweltering afternoon heat of Barranquilla the Uruguayans were at full stretch.

Handball! Controversy is sweeping football - but will the lawmakers do anything?

Brazil and Argentina cruise to top of CONMEBOL, Colombia in trouble

The visitors made a clever switch at half-time, exchanging 4-4-2 for 4-5-1, increasing their protection against James. At this point the game was in the balance and Colombia deserved an equaliser. But the gamble failed when James lost possession, and, with no Barrios to protect, the defence was exposed. Centre-back Jeison Murillo came across to make the tackle and -- perhaps harshly -- was adjudged to have committed a foul in the box. At the other end Colombia complained about a penalty they had not been given. On such margins, a possible 1-1 can become 0-2, and the score line looked even worse after Darwin Nunez added a long-range third.

In this case Colombia's performance was not as bad as the result might suggest, but the same cannot be said of their display in Ecuador four days later.

Queiroz went back to his original thinking, bringing in his third-choice right-back Luis Orejuela to allow Cuadrado to return to midfield, but there were a number of problems with this. Orejuela is untried at this level and Barrios, the best defensive midfielder in the squad, was subsequently kept out of the starting lineup. Primarily, though, the 4-3-3 was probably too optimistic for the conditions of the Ecuadorian capital.

Quito stands 2,800 metres above sea level. Ecuador make full use of the altitude, and pick up most of their points at home. Unacclimatised visitors suffer from the lack of oxygen in the air. It prevents them from playing their normal game, and means that a conservative gameplan is usually advisable. But for all of the worldwide experience of Queiroz, this was new to him, and he had to watch in horror as his defence collapsed and Ecuador raced into a 4-0 lead before the 40-minute mark.

Colombia's coach may have wanted to make 11 substitutions. He made four just after Ecuador's fourth goal -- surely the first time that so many changes have been made before half-time in a competitive match. The addition of Barrios helped steady the ship, but the damage had been done, and things got worse in the final 20 minutes when Queiroz appeared to give up on midfield altogether and made another attacking substitution. After the 6-1 drubbing, the coach confessed that "We have neither pride nor honour at being involved in a result like this."

Dan Thomas is joined by Craig Burley, Shaka Hislop and others to bring you the latest highlights and debate the biggest storylines. Stream on ESPN+ (U.S. only).

But will he still have a job? His predecessor, the Argentine Jose Pekerman, had a spell of more than six years in charge, taking Colombia to their first World Cups of the century and to their quarterfinal debut in 2014. Before him, though, there was a parade.

Between 1999 and 2011, Colombia had eight coaches, and were quick to get rid of them. Some good names were chewed up and spat out. Jorge Luis Pinto, who went on to do some excellent work with Costa Rica, was quickly deemed not good enough. There was a brief spell for current Chile boss Reinaldo Rueda, who later took both Honduras and Ecuador to World Cups. Assistant coach in the 1980s and '90s, and the man who took them to France '98, Hernan Dario Gomez left after an off-the-field scandal.

And the example most pertinent to the current situation is that of Pekerman's predecessor, Leonel Alvarez. The key holding midfielder in the great '80s and '90s sides, Avarez found that his prestige as a player was no defence against the impatience directed at the national team coach. He warmed up for the 2014 qualifiers with two friendly wins, and led his side to an excellent victory away to Bolivia in the opening round of the campaign. Then came a doubleheader of home games. Both times Colombia took the lead, but Venezuela hit back to draw, and with Lionel Messi and Sergio Aguero firing together, Argentina ended up 2-1 winners. Just those two results -- and one narrow defeat in five games -- were enough to have Alvarez packing his bags.

If the same criteria applies, Queiroz will certainly be sacked, and the Colombian FA are looking at their options. But one thing may yet save the former Real Madrid boss. It is not clear that the FA can afford to sack him. The sale of TV rights to the World Cup qualifiers has been disappointing, and there is no revenue coming in from ticket sales. Money is tight.

There is also no pressing hurry. The next round is at the end of March. But then the games come thick and fast, including the Copa America in June and July, which Colombia are co-hosting. The FA need to be sure they have the right man to ensure that James & Co. are taking on the opposition and not each other.