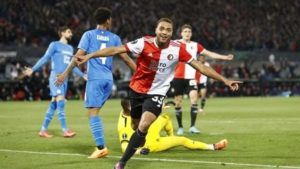 Super Eagles forward, Cyril Dessers said the game against Marseille in the Europa Conference League is the best of his career so far, Nigeriasoccernet.com gathered.

Dessers who was on-loan at Feyenoord from KRC Genk during the 2021/22 season scored a brace for his club against Marseille during their UEFA Europa Conference League semifinal first leg clash in Rotterdam to help them secure a 3-2 win.

As reported by BSNSports from information they gathered via NU.nl, Dessers said: "It still gives me goosebumps," talking about the brace against the French side.

Dessers made it 1-0 in the game against Marseille with an assist from Luis Sinisterra in the 18th minute.

"The stadium exploded in such a way, and that was the best game of my career. Everything was right."

The 1-0 was not yet the highlight. After Marseille had made it 2-2, Dessers was decisive again and made it 3-2, sending Feyenoord to the final.

"It has without a doubt been the best year of my career," the Nigerian said.

"It's one of the best dressing rooms I've ever had. Everyone was focused and no one complained. It's unbelievable that I'm part of the rich history of Feyenoord."

Trainer Arne Slot contributed to the success, he says. "He knew how the opponent played and countered it completely. He thought two, three steps ahead. With Erik ten Hag, he is the best trainer I've had."