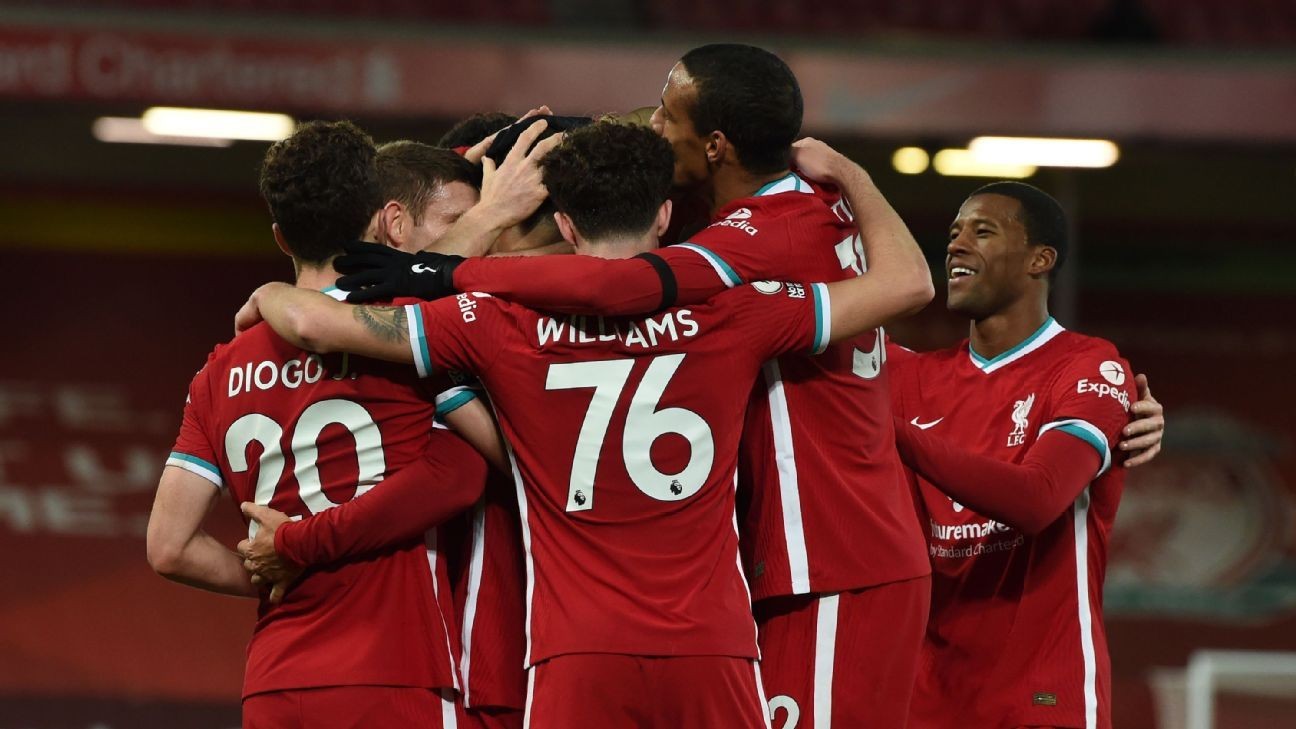 LIVERPOOL, England -- You can always gauge the strength and true quality of champions when they have their backs against the wall and the pretenders are lining up to take advantage of any sign of weakness. Liverpool faced that test against Leicester City at Anfield on Sunday, and responded with an emphatic warning to any rival believing they can beat them to the Premier League title this season.

Jurgen Klopp's team went into this weekend with more injuries (eight) than any other top-flight side, and they were also without Mohamed Salah as a result of the Egypt forward being forced to self-isolate after testing positive for COVID-19 while on international duty earlier this month. But despite having almost a full team on the sidelines, Liverpool cruised to a 3-0 victory against a Leicester side that would have gone top had they claimed all three points.

This was as big a test as Liverpool have had at Anfield this season: key players missing, a defensive crisis that led to James Milner filling in at right-back and Leicester, on a run of six straight wins in all competitions, aiming to end Liverpool's 63-game unbeaten run at home in the league. Even the omens favoured Brendan Rodgers' Leicester. The last time Liverpool went 63 league games unbeaten, between February 1978 and December 1980, their club record run was ended with a defeat against Leicester, so with all of Liverpool's mounting problems, it seemed written in the stars that the Foxes would halt them on 63 games again.

They didn't, and Liverpool have now made it 64 Premier League games unbeaten at Anfield -- 53 of those games have been victories. After harshly having a penalty claim rejected in the third minute, when Liverpool defender Joel Matip appeared to push his left arm towards the ball, Leicester barely landed a glove on the champions.

Handball! Controversy is sweeping football - but will the lawmakers do anything?

Liverpool or LiVARpool? Liverpool's nemesis as Klopp's men affected more than others

Premier League so far: Why Spurs, Chelsea will challenge Liverpool, Man City for the title

So for all the doubters beginning to believe that Liverpool's injuries will knock them off course and leave Tottenham Hotspur and Chelsea to fight it out for the Premier League trophy, the reality is likely to be somewhat different, as Klopp's men showed against Leicester. But make no mistake, Liverpool face a much tougher battle for the title this season than last, when they finished top with an 18-point margin over second-placed Manchester City.

Jose Mourinho once again has the scent of silverware in his nostrils with Spurs and Chelsea are also looking strong under Frank Lampard. Both sides, who meet next Sunday, look to have the quality and depth to sustain a title challenge, and Leicester will bounce back from this defeat and remain a threat. Pep Guardiola's City are another side with the ability to challenge, despite their unconvincing recent form. But one team remain the clear favourites for the crown, and that is Liverpool, because no other side could overcome the loss of so many prominent players and still win against a top-level side like Leicester.

The Reds were without three of their title-winning back four, with Trent Alexander-Arnold, Virgil van Dijk and Joe Gomez all missing. Van Dijk and Gomez may not play again this season after both undergoing major knee operations. But Fabinho stepped in at centre-half, with fellow midfielder Milner at right-back, and Leicester failed to score for the first time in seven games.

Jordan Henderson was also missing, denying Klopp's team of their captain's energy, leadership and drive in midfield, and Thiago was another senior figure unavailable. But Georginio Wijnaldum, Curtis Jones and Naby Keita (who was injured early in the second half) won the midfield battle and laid the foundations for Liverpool's win. Leicester's usually impressive midfield of James Maddison, Youri Tielemans and Nampalys Mendy could not get a foothold and, as a consequence, striker Jamie Vardy was starved of service up front.

Yes, Liverpool were helped on their way to the win with Jonny Evans heading in an own goal on 21 minutes, but by the time Diogo Jota became the first Liverpool player to score in his first four home games for the club with a glancing header from Andrew Robertson's cross on 41 minutes, the outcome wasn't in doubt. Roberto Firmino made it 3-0 on 87 minutes, ten minutes after hitting the post and having an effort cleared off the line (replays showed the margin to be minimal), but it could and should have been a bigger win for Liverpool.

But the scoreline doesn't matter. The points and the performance are what will give Klopp the most satisfaction and send the clearest message to Mourinho, Lampard and Guardiola: Even with half a team missing, Liverpool were still too good for one of the most consistent teams in the Premier League.

The challengers might be getting in line, but by the time Chelsea face Spurs at Stamford Bridge next Sunday, Liverpool will be top of the league if they avoid defeat at Brighton 24 hours earlier. This win showed just how formidable they really are, and once Liverpool go top, it will be a tough task for any side to knock them off for long.