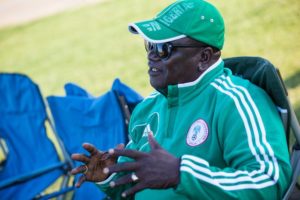 The veteran football tactician passed away on Wednesday and has been buried, the Nigeria Football Federation has confirmed

Nigeria U15 coach Danladi Nasidi has died at the age of 68, the Nigeria Football Federation has confirmed.

According to the country’s football ruling body, Nasidi passed on Wednesday morning and has been buried according to Islamic rites.

Born on January 1, 1952, Nasidi was among the elite class of coaches in the country to bag a Caf A coaching licence.

After a brief stint as handler of the Gabonese national team in 1986, he helped his former team Stationery Stores escape relegation in 1994 before taking charge of Niger Tornadoes for several years.

On the international scene, he was Ismaila Mabo’s first assistant coach to the 1999 Fifa Women’s World Cup – where the Super Falcons reached the quarter-final in the United States.

As handler of the Future Eagles, he led the team to a silver medal finish at the 2019 African Games in Algiers.

With condolences pouring in, chairman of the NFF Technical and Development Committee who doubled as boss of Niger State Football Association Yusuf Ahmed said the deceased served Nigeria passionately and diligently in every role he found himself.

“It is a very sad day for Nigeria football, because Nasidi has been playing a huge role in grassroots development programmes for our football,” said Ahmed.

“He was very passionate about youth football and has moulded our U15 boys into a solid and formidable unit over the years. We will surely miss him.

“He was someone who evinced passion for youth and development every time and everywhere you met him. I am crestfallen. When I started my journey into football administration, Nasidi was one of the coaches who spurred me into investing in grassroots development. His passion was infective.

“I never regretted our relationship and my foray into grassroots development. Late Danladi Nasidi was a good man inwardly and outwardly and while we loved him, God loved him more.

“On behalf of the Nigeria Football Federation and the Nigeria football family, I pray to God to grant late Nasidi eternal rest and also grant all those he has left behind the fortitude to bear the big loss.”