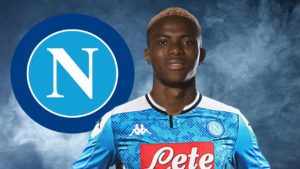 Former Napoli striker Bruno Giordano has shared his thoughts on Victor Osimhen's transfer to the Naples outfit and the possibility of the Nigeria international partnering the experienced Belgian Dries Mertens in attack in the upcoming season.

Osimhen is set to begin training with Napoli in the coming days after agreeing a five-year deal with the two-time Serie A champions.

Giordano admitted that he has seen little of Osimhen to completely evaluate him but thinks that he is a striker with potential.

"What player is Osimhen? I have seen little of him, I find it hard to evaluate him completely. In Napoli he will have to show his best, I think he has appreciable potential, as a complete striker," Giordano told La Gazzetta dello Sport (via Area Napoli)

"However, he must be put in the condition to express himself. The conditions are good, one with his qualities expresses himself to the maximum when playing in the open field . "

He added : "Mertens-Osimhen partnership? I think it is difficult, because Mertens is no longer the age to do the whole band as he wants the Gattuso's game.

"I'm curious to see if there will be tactical changes to make them play together. "

Napoli broke their transfer record by paying Lille 70m euros to sign the 21-year-old Osimhen and the fee could rise to 80m euros with bonuses.