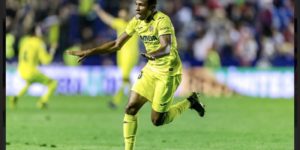 The Super Eagles winger has been in impressive form recently for the Yellow Submarines, and that’s got the attention of La Liga authorities

Samuel Chukwueze’s brilliant form has been rewarded after he was nominated for La Liga’s April Player of the month.

Chukwueze was one of Villarreal’s best players in April, having scored three goals in five league games. The 21-year-old scored a brace in the 5-1 thrashing of Levante before his stunning goal in the loss to Barcelona last Sunday.

The former Golden Eaglets star’s performance this season has been below par, but he has managed to hit form at the right time.

Villarreal are currently fighting a European spot in La Liga while they face Arsenal in the semifinal of the Europa League on Thursday.

The Yellow Submarines will hope Chukwueze can continue to deliver as they aim to achieve their objectives.