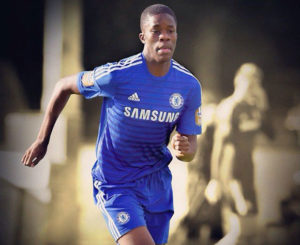 English-born forward Ike Ugbo has chosen to pledge his international future to Nigeria and is going through the correct FIFA procedures to gain clearance.

The 22-year-old is currently on loan at Belgian club Cercle Brugge from Premier League giants Chelsea.

All Nigeria Soccer revealed last year that Ugbo has begun the process of switching international allegiance, having represented England at U-17 level.

He is hoping that the clearance will be granted before Nigeria’s Africa Cup of Nations qualifiers against Benin and Lesotho in March, with the ultimate goal of playing with the Super Eagles at the 2022 World Cup in Qatar.

The Nigeria Football Federation (NFF) have long taken an interest in the attacker, who is set to become the third Chelsea-affiliated and former England youth player to switch allegiance to the West African country, following in the footsteps of Victor Moses and Ola Aina.

Speaking to Het Laatste Nieuws, Ugbo revealed: “The paperwork is not quite in order yet, but my agent is working on it. Playing a World Cup is every footballer’s dream, isn’t it?”

Ugbo is having a great season in Belgium with Cercle Brugge, having netted 10 goals in 16 Jupiler Pro League appearances.