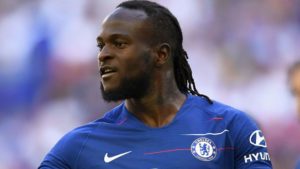 Victor Moses has left Chelsea to play at Spartak Moscow for the 2020-21 season, the Blues confirmed on Thursday.

Moses, 29, has barely featured at Stamford Bridge over the past few seasons, spending most of his time elsewhere on temporary moves.

That will be his fate once more this term, as he penned a loan deal with the Russian club which will run until the end of the season and includes a purchase option.

"Victor Moses has joined Spartak Moscow on loan for the remainder of the 2020/21 campaign," Chelsea revealed in a statement published on the club's official website.

"The Russian side are 10 games into their league season and sit second in the table, level on points with city rivals CSKA Moscow.

"Spartak Moscow and Chelsea have agreed the transfer of Nigerian star Victor Moses to our club. The loan agreement with the 29-year-old midfielder is until the end of the season with the option to buy! Welcome, Victor!"

Spartak Moscow and Chelsea have agreed the transfer of Nigerian star Victor Moses to our club. The loan agreement with the 29-year-old midfielder is until the end of the season with the option to buy!

Moses made the move to Stamford Bridge from Wigan in 2012, having begun his career at local side Crystal Palace as a youth.

He enjoyed his most consistent run in the first team under the stewardship of Antonio Conte from 2016-18, starting regularly in both of the Italian's seasons at Stamford Bridge and lifting the Premier League title in 2016-17.

Conte's exit and the arrival of fellow Italian Maurizio Sarri, however, saw the winger fall out of consideration, leading to a loan move to Fenerbahce in January 2019.

That was the first of a series of temporary deals for Moses, who stayed on in Turkey for the first half of the 2019-20 season and was also reunited with Conte earlier this year at Inter.

At international level Moses made 37 appearances for Nigeria prior to retiring from Super Eagles duty after the 2018 World Cup, scoring 12 goals and helping the country win the 2013 African Cup of Nations.