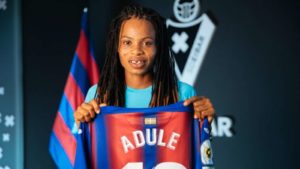 Spanish Reto Iberdrola club Eibar have announced the signing of Nigeria striker Charity Adule on a one-year deal for an undisclosed fee.

Adule left it late to complete her move to Spain before September 20 - the deadline day after she parted ways with Kazakstan women's top-flight champions BIIK Kazygurt earlier in January.

The 25-year-old had joined BIIK in 2014 from Nigeria Women's Premier League side Bayelsa Queens following her impressive display at the 2012 U20 Women's World Cup in Japan.