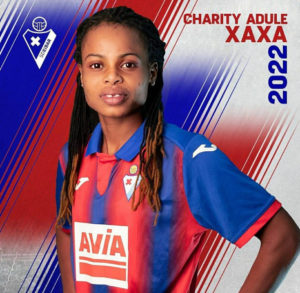 Adule arrived in Spain in September 2019 from Kazakstan side BIIK Kazygurt, where she spent four-years, winning four Kazakstani titles and also featured in the Champions League, scoring twice.

She made an impactful debut season, helping Iker Dorronsoro's ladies team gain promotion to the top-flight for the first time since 2011 following the league cancellation due to Covid-19 in May

The striker scored 10 goals in 14 outings as her side secured 13 victories, seven draws, and just two defeats to earn promotion after a second spot finish with 46 points from 22 games.

Her impressive showing in Eibar's promotion achievement saw the club move to hand her a contract extension for two more years.

The Liga Iberdrola club took to its website to announce the news, saying Adule will remain at the club until at least June 2022.

"Eibar have renewed the deal of Charity Adule until 2022," the statement on the club's website read.

"The 26-year-old Nigerian player arrived at the armoury club last season from Bllk Kazygurt, the champion team of the Kazakh league, and 20/21 will be her second season in the team.

"Adule has been an absolute international with his country since 2013."

Having extended her stay, Adule will become the fifth Nigerian to compete in the Spanish elite division next season, after Asisat Oshoala, Rita Chikwelu, Chidinma Okeke and Toni Payne.

And the former Nigeria youth international has taken to social media to express her excitement about her contract extension.

"I am happy to extend my bond with SD Eibar for more two years...muchas gracias. You're all that matters lord," she wrote on her Instagram page.

Adule, who also welcomes South Africa striker Thembi Kgatlana earlier this week will be hoping to surpass her fine form last term when Eibar open their top-flight campaign in September.