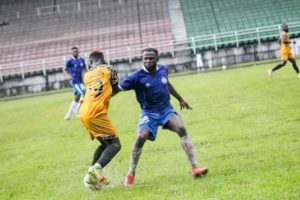 Super Eagles B and Rivers United left back Ebube Duru while speaking on his thunderous shot assisted into the net by Watanga defender said it was an outcome of the training they had before the game.

Speaking exclusively to Nigeriasoccernet.com on the goal, Ebere said:

"Before the game we did similar program where the coach laid the ball outside the 18 and ask us to shoot. So when the ball was coming in my direction, all what was on my mind was just to take a shot and luckily for me I took the shot which got deflected into the net."

"I was very happy after the goal because you know playing in the CAF Champions League and playing at home first you have to score more goals, so when I got the second goal I was very happy and it made me feel proud of myself because it shows that of a truth, practice makes perfection.

"It was a thing of joy for me and the team, so I very happy about the goal," this he said when asked about how he felt after scoring the goal.

Ebube also took time to talk about the team and how they intend to approach the games as they come.

"The team is getting in shape back because you know there are new players in the team but as we continue to play together, we will get better and be in good that such that teams will find it difficult to defeat us.

"With the way we played on Sunday, we can compete against any team in Africa and by God's grace we're going to make it into the group stage and make a mark in this season's champions league," he concluded.

With a 3-0 advantage going into the second leg in Liberia, Rivers United need to avoid a defeat up to 3-0 to progress into the next round.

A draw and a win is also achievable as that will send a strong signal to their next sets of opponents in the competition.