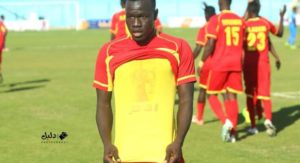 Sudanese midfielder Saifeldin Maki bagged a hat-trick as Al Merreikh thrashed Nigeria’s Enyimba 3-0 in the first leg of their CAF Champions League first round tie at the Al Hilal Stadium on Wednesday afternoon.

Maki put the home team ahead in the sixth minute, tucking the ball into the net after dribbling past Enyimba goalkeeper Bassa Djeri.

Enyimba struggled to get going afterwards and conceded the second goal a minute before half-time, with Maki slotting home after a superb counter attacking move.

Maki put the game beyond the two-time champions when he netted the third on the dot of regulation time.

The Peoples Elephant must overturn the deficit in the second leg to scale through into the next round of the competition.

Enyimba head coach Fatai Osho introduced the duo of Nabil Yarou and Tosin Omoyele after the interval, but the changes had little effect on the game.