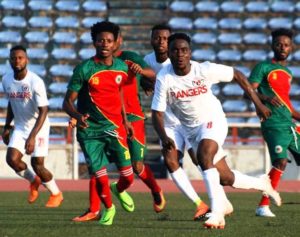 Rangers International coach Gbenga Ogunbote is confident that the Flying Antelopes will qualify for the First Round of the 2018/2019 Total CAF Confederation Cup competition ahead of their Preliminary Round opponents, Defence Force S.C of Ethiopia.

Enugu Rangers will face Defence Force S.C at the magnificent, thirty-five thousand capacity Addis Ababa international Stadium on Wednesday for a place in the First Found of the competition.

Ogunbote led Rangers to a 2-0 win in their Preliminary Round first leg clash over Defence Force S.C , thanks to a brace netted by Godwin Aguda

Aguda scored twice from the penalty spot on 55 and 84 minutes after substitutes, Ajani Ibrahim and Kelvin Itoya were fouled in the box.

“With the performance I saw of them in Enugu, I really don’t see us ending our campaign in Addis Ababa,” Ogunbote told CSN..

Ogunbote Confident that Enugu Rangers will reach the First Round of the CAF Conversation Cup.

“Yes, they pass the ball well and we also have our strong points which will take us above them when we play at their backyard by the special grace of God,” the Rangers’ coach said of Defence Force S.C.

“We may have some challenges in personnel registration for the competition, but those we have are capable of holding their heads high when the chips are down.”

Ogunbote led Sunshine Stars to the semi-finals of he CAF Champions League in 2013 and won the 2018 Aiteo Cup with Enugu Rangers.