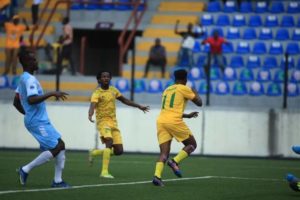 The former Abia Warriors player who joined the Harmony Boys during the transfer opened the scoring as Kwara United defeated their visitors AS Douanes 3-0 in the first leg of the CAF Confederation Cup preliminary rounds in Lagos.

Speaking on the goal in an exclusive chat with Nigeriasoccernet.com correspondent, Samson said:

"I saw it coming cause I wanted to prove my effort and the only way to do that is by scoring.

"I knew I would score so am very much happy about the goal."

Despite the huge win in Lagos, Samson believed its over yet as AS Douanes are also a very good side who will want to fight till the end.

"It's not over because this is football, which means anything can happen.

"They are good side and that they really prove to us in the 2nd half of the game on Sunday."

"We need to play the return leg with winning mentality, fight and deny them of any scoring opportunity. So it's not over yet until it is over," Samson added.

Kwara United will face AS Douanes in the return leg this Sunday in Niamey, the capital of Niger Republic.