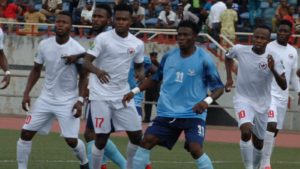 One of Nigeria’s flag bearers in the Caf Confederation Cup, Enugu Rangers, take on Togolese club ASC Kara for a place in the group stage of the competition on Sunday.Last weekend in Lome, the Flying Antelopes suffered a 2-1 defeat in the first leg tie against the reigning Togolese champions.

With this development, Rangers would be looking to overturn that deficit in Sunday’s second leg tie at the Nnamdi Azikiwe Stadium, Enugu.

Fully aware that this is a make-or-mar encounter, Rangers were in a closed camp perfecting their strategies for the ASCK tie for three days this wee

The Flying Antelopes manager Benedict Ugwu has hinted there could be changes to his team as he is looking for the perfect mix of players who could deliver on the much-coveted group stage ticket.

Ugwu may be handing starting roles to the likes of Kingsley Eleje, Saidu Mutawakilu and Chinonso Eziekpe.

However, the trio of Pape Sane Ousmane, Issif Traore and Ajani Ibrahim are all not available as they are still out injured.

For ASCK coach Kassim Gouazou, he will most likely stick to the matchday squad that earned him his second victory on the continent.

Nigerian goalkeeper Noble John remains the first choice while the attack may be led by the captain of the side, Richard Nane Yendoutie, with able assistance from Ashraf Agoro, Koudagba Kossi and Sapol Mani.

At the rear, the defensive pair of Latif Issaka and Kililou Djer would likely be trusted for a positive outing in Enugu.

Sunday’s tie at ‘The Cathedral’ has already been declared as 'free', with the Enugu State government announcing there would be no gate fees for the anticipated crunch clash.

In their last continental home game, Rangers romped to a 3-1 win over AS Pelican.

A similar result or something better will seal the Flying Antelopes’ place in the group stage of the Caf Confederation Cup for the second successive season.