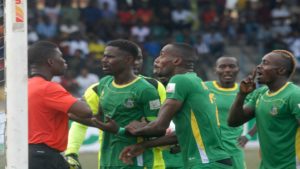 Kano Pillars have been drawn against Ghana giant Kumasi Asante Kotoko  in the preliminary stage of the 2019/2020 CAF Champions League competition.

The Porcupine Warriors booked a place in the upcoming edition of the inter-club competition last month when they emerged as champions of the tier 1 of the Ghana Football Association (GFA) Normalization Committee (NC) Special Competition.

During the draw for the competition which is expected to start next month, Kotoko has been paired against Kano Pillars who are no strangers when it comes to competing in any of CAF's inter-club competitions.

The first leg of the tie will take place in Kano with the return leg set for Kumasi two weeks later.

Kano Pillars was founded in 1990 and will be making their 6th appearance in African Club Competition this season. Their best performance came in 2009 where they reached the semi-final stage after defeating Egyptian giants, Al Ahly on the road.

For Kotoko, her last appearance in the CAF Champions League was in 2015 where they were eliminated at the first round stage by Algerian side MC El Eulma