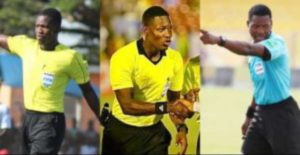 Daniel Laryea will be the centre referee for the match which is schedule for October 9, 2022, at the MKO Abiola Stadium in Abuja.

He will be assisted by Kwasi Acheampong Brobbey and Patrick Papala with Adaari Abdul Latif as the fourth official.

Match Commissioner for the game is Marcelin Gaha Djiadeu from Cameroon.

Plateau United will be hoping to get into the group stages of the CAF Champions League.

They defeated Stade Mandji of Gabon 3-2 on aggregate in the first preliminary round and will have it all to do to defeat 4 time CAF Champions League winners Esperance Sportive de Tunis.