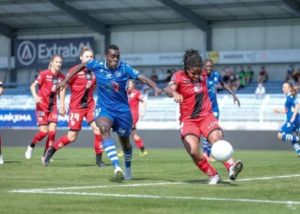 Super Falcons striker Desire Oparanozie has a bus-stop in Guingamp, France, named after her.

This was confirmed in a photo published on Twitter.

Oparanozie joined Guingamp in 2014 from Turkish club Ataşehir Belediyespor and had a memorable time there.

Ahead of the 2019–20 season, Oparanozie was named club captain and began her reign with a win over Metz on the opening day of the season.

And after six years at Guingamp Oparanozie signed a two-year contract with Dijon FCO on 30 June.

Oparanozie started her career at Bayelsa Queens in the Nigerian Women’s league and moved to Delta Queens in 2010.

She then spent two months on loan at Düvenciler Lisesispor in the Turkish Women’s First Football League in 2011, before returning to Delta Queens.

In 2012, she joined Rossiyanka from the Russian Women’s Football Championship, with them she played four matches at the 2012–13 UEFA Women’s Champions League, scoring one goal.

She joined Bundesliga club VfL Wolfsburg for the 2013–14 season signing a two-year contract.

In the first half of the season, she only appeared in one game, and mostly played for Wolfsburg’s second team.

After half a season, she left Wolfsburg and on 21 February 2014, ssigned for Ataşehir Belediyespor to play the second half of the season in the Turkish Women’s First Football League.