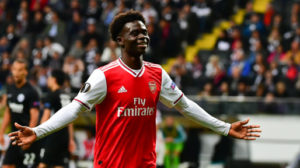 Exciting winger Bukayo Saka has started the 2020-2021 season in encouraging fashion, helping the Gunners record wins in all the three matches he has started.

The Hale End Academy product has revealed that Arsenal first team manager Mikel Arteta and experienced central defender David Luiz are his mentors at the Gunners.

Saka highlighted that Luiz won the Champions League during his Chelsea days and other up-and-coming players at Arsenal look up to him for advice or if they need to talk about their football with someone.

Speaking to beIN Sports Asia, Saka said : "I feel like the boss here, he just knows so much about football, any questions I have he always has the answers.

"I feel like the boss and also David Luiz, you know he has so much experience.

"He's won the Champions League, every day I'm sure if you ask all the other youngsters how much he helps us and he advises us, he's just so good to have."

Saka and his Arsenal teammates return to Anfield on Thursday to face Liverpool in the last sixteen of the Carabao Cup.