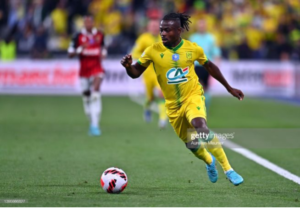 According to reports from France, Newcastle held negotiations with Simon over a potential transfer but The Magpies have now switched their sights to Moussa Diaby of Bayern Leverkusen. That has allowed Brighton to move ahead with talks of their own with the Nigerian international.

However, The Seagulls could face competition from Ligue 1 sides such as OGC Nice and Marseille who have made enquires over the skillful winger.

French news outlet GFFN, reports that Nantes president Waldemar Kita will demand a fee between €10m and €15m for Simon and that the player wants to stay in France for next season but isn’t ruling anything out just yet.

Brighton have held a long-standing interest in Simon. They were close to signing him in 2017 while he was still at K.A.A. Gent, but the deal fell through after both teams failed to reach an agreement.

The Canaries will play Europa League football in the upcoming season as a result.