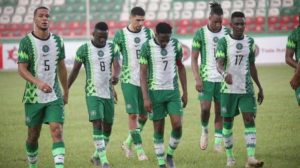 Super Eagles for the second time has failed to beat the indomitable lions drawing after the senior team of Cameroon beat their earlier game.

The game was started on a front footed with Bayern Munich forward Eric Maxim Choupo Moting in the 15 minutes came close to scoring but was denied by Maduka Okoye after Valentine Ozornwafor a goal bound move off the line .

the first half ended with super Eagles seeing more of  balls but the indomitable lions were more likely to score but wasteful infront .

Second half saw the Super Eagles improved and showed better coordination in defence and attack and almost resulted in a goal.

Everton star Alex Iwobi missed a clear opportunity to put the Eagles ahead with a quick interchange of passes with veteran Ahmed Musa but with the goalkeeper beaten he missed the chance .

Both teams showed some beautiful displays as the match ended goalless.