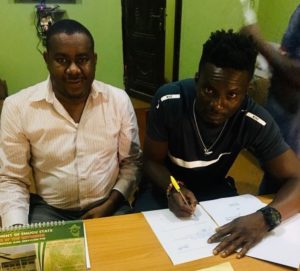 Bonsu, a former Ghana U-17 national team goalie, joined Rangers on a free transfer in January 2016 after parting ways with the country’s Premier League Club, AshantiGold.

Initially third choice behind Emmanuel Daniel and Itodo Akor, Bonsu who represented Ghana at the 2005 U-17 World Cup in Peru played a key role as Rangers won the NPFL title for the first time in more than three decades in 2016.

He won his second trophy in 2018 when the Flying Antelopes claimed the Aiteo Federation Cup title at the expense of Kano Pillars.

“I’m happy to extend my stay with Rangers. I have enjoyed my time so far at the club and it is good that I will be here for another two years,” Bonsu told Completesports.com.

“We have won the League and FA Cup titles during my time here and I hope things will get better in the next two years.

“Things didn’t work out well for us last season, but hopefully, we will improve and do well in the new season