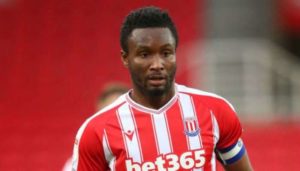 Mikel missed the Potters 1-0 away win against Wycombe Wanderers on Wednesday as a result of injury.

The former Nigeria captain failed to complete 90 minutes for the first time this season after limping off the pitch in Stoke City’s 0-0 draw at Sheffield Wednesday last weekend.

“John Obi’s still an extreme doubt, Steven Fletcher, Jordan Thompson… it’s unlikely that we’ll have any of those players back for the game tomorrow,”O’Neil stated during his interaction with the media on Friday.

“We’ll monitor them later today and see where they’re at but I think we have to be mindful of the schedule as well and not rush people back too soon.

“The risk is you lose them to longer and we want to avoid that situation going forward.

“We are a wee bit stretched in terms of players that are out.”

Mikel, who linked up with Stoke City on free transfer this summer has featured in 14 league games for the club.