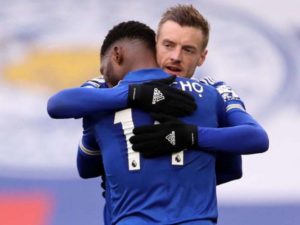 Nigerian international Leicester City’s Kelechi Iheanacho and Jamie Vardy are the best pairing in the Premier League currently, according to West Bromwich Albion manager Sam Allardyce ahead of their clash on Thursday.

Three days ago, the duo linked up at Wembley Stadium to fire the Foxes into the FA Cup final as Vardy provided the assist that helped Iheanacho score the match-winning goal in their 1-0 triumph over Southampton.

Vardy has scored 14 goals across all competitions this season while his Nigerian teammate has 15 goals to his name already.

On Thursday, Iheanacho will be aiming to surpass his best goalscoring record in the Premier League having equalled his 2015-16 achievement of eight goals.

With West Brom looking to boost their survival hopes with a third straight win, Allardyce emphasised the need to stop the duo if they want to leave the King Power Stadium with maximum points.

“We’ve got to look after maybe the best pairing in the Premier League at the moment,” Allardyce was quoted by the Independent.

“Iheanacho and Vardy are probably two of the most dangerous forwards in the Premier League.

“Part of our task is to try and keep them from scoring a goal and making sure we give ourselves a chance of winning the game. That will be a key area for our defence to try and look after those two.

“Getting to the FA Cup final will have lifted Leicester’s spirits because that is a major achievement. On the back of that will make life difficult for us, and they’ve still got to get points to maintain their Champions League position.”

Leicester City are third in the Premier League with 56 points after 31 matches – a point above fourth-placed Chelsea and fifth-placed West Ham United.

The Baggies, however, are 19th in the table with 24 points from 31 matches – nine points adrift of safety.