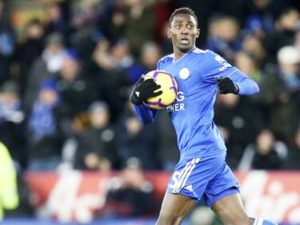 Four months into a season that has the Foxes challenging at the top end of the league table alongside heavyweights like Liverpool and Manchester City, Nigeria international Wilfred Ndidi has been praised as one of the key reasons why Leicester City are flying.

Ndidi has been an ever present personnel in the middle of the park for Leicester City since joining from Genk in 2017 as a direct replacement for N’Golo Kante, who left for Chelsea but the 22-year-old has taken his art to a completely different level this season.

This remarkably consistent form has helped Leicester City become a team difficult to score against with the Foxes boasting the league’s best defense having conceded just eight times in 13 games.

“I think he’s the best in the Premier League at tackling and winning the ball back, bar none,” Maddison told Football Daily.

“I know [N’Golo] Kante is a brilliant player and there are players like that. But actually winning the ball back and taking the ball off the opposition, I don’t think there is anyone better than Wilfred.

“Sometimes you get a player like that and what he does doesn’t get on the back page of the papers, doesn’t get talked about on Match of the Day.

“He’s fantastic at what he does and he lets players like me and Youri Tielemans do our thing higher up the pitch because we know we’ve got that solidity behind us.”

Leicester City will square up against Everton at the King Power Stadium on Sunday, with Ndidi likely to be tasked with the mission of stopping international teammate Alex Iwobi from wrecking havoc.