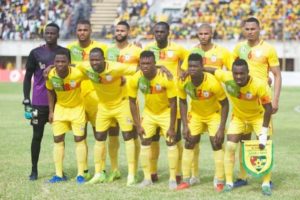 Captain of the side, Stephan Sessegnon who plays for Turkish club, Genclerbiligi, Huddersfield United’s Steve Mounié and Cebio Soukou who plays for German side Arminia Bielefeld are among the top players in the squad.

Melvyn Doremus and Jean Ogouchi have been called up for the first time, while Mama Seibou,

Cédric Hountondji and Sessi d’Almeida are back in the squad after missing last month’s friendly encounter against Zambia as a result of injuries.

Two regular members of the team, Sedangondji and Rodrigue Kossi were however axed by Dussuyer.

Benin will face the Super Eagles on November 13 at the Akwa Ibom International Stadium, Uyo and then host Sierra Leone four days later at home in Cotonou.