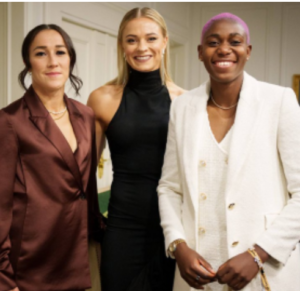 Super Falcons striker Asisat Oshoala missed out on the 2022 Women’s Ballon d’Or award at a ceremony that took place in Paris at Theatre du Chatelet, on Monday evening.

Oshoala was among the Barcelona players that traveled to the French capital for the award ceremony but watched on as her teammate Alexia Putellas was awarded the Ballon d’Or.

Barcelona captain Putellas retained the prestigious award having won it for the first time in 2021.

Oshoala and Putellas were part of a 20-strong shortlist for the 2022 Ballon d’Or after a breakout season at Barcelona. 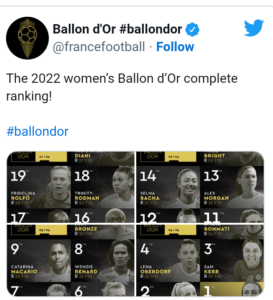 The former Arsenal and Liverpool star was ranked at the sixteenth place.

Despite her injury struggles, the 2021-2022 season was a stellar one for Oshoala as she claimed the Spanish Primera Division Pichichi award with 20 goals in nineteen appearances.

The 28-year-old won the treble with Barcelona - Primera División Femenina, Supercopa Femenina and Copa de la Reina - and was in the side that lost to Lyon in the Champions League final.

On the international stage, she was named in the Super Falcon squad to the 2022 Women's Africa Cup of Nations but suffered an injury in the opener against South Africa that ruled her out of the rest of the tournament.