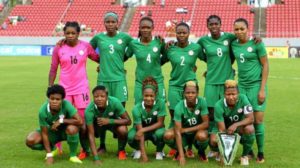 Defending champions, the Super Falcons of Nigeria will know their group opponents for the 2018 Total Women’s African Cup of Nations (AWCON) on October 21 when the draw will take place in Ghana.

The Confederation of African Football, CAF announced on Monday that the draw for the eight-team tournament will take place at a yet to be named venue in Accra, Ghana on October 21.

Hosts Ghana will be seeded in Group A, while holders Nigeria will be the top seed country for the 2018 AWCON Group B.

Former champions, Equatorial Guinea, Cameroon, South Africa, Mali, Algeria and Zambia are the other countries that have qualified for the tournament.

The Super Falcons are the dominant force in AWCON having won eight out of the 10 editions of the competition since it began in 1998.

They won the last edition of the AWCON in 2016 after edging out hosts Cameroon 1-0 in the final.

The tournament will take place in the cities of Accra and Cape Coast from 17 November to 1 December 2018.