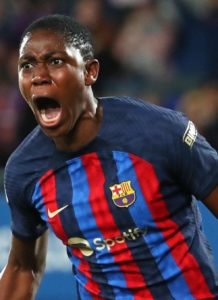 Three goals; one in the first half and two in the second half from her and four other goals  saw the Spanish giants win by 7-0 to get a 50th consecutive win.

Making history as the only team male or female to have won 50 consecutive matches in the league.

Crnogorcevic set up Oshoala for her first goal in the 25th minute what was Barcelona's second goal after she had opened the scoring in the 9th minute.

Crnogorcevic scored her second in the 41st minute and by the start of the second half Vicky Lopez made it four.

The African footballer of the year scored two in the 56th and 63rd minutes to complete her hat trick as Marion Caldentey completed the thumping.

Oshoala who was in action for 90 minute now has 10 goals to her account in the league. Her goals are now 95 putting her fourth in the scorer's chart of the club.

On the other hand, Rita Chikwelu also saw the full 90 minutes for Las Plamas, picking up a yellow card in the 27th minute.