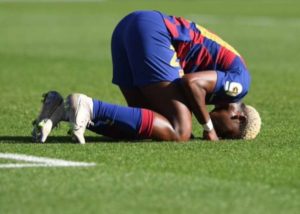 Super Falcons skipper Asisat Oshoala has been ruled out of tonight’s cup tie against Sevilla after she suffered an ankle injury.

Barcelona Ladies announced Oshoala, who only recently bounced back from a foot surgery, will miss the Sevilla clash after she sprained her left ankle.

This may also impact on her selection for the UEFA Champions League Final in Gothenburg, Sweden, on May 16.

Oshoala was a late sub for this week’s Champions League semifinal return leg match at home against PSG.

Barcelona are defending the cup they won last season and are also 14 points clear at the top of the table even with three outstanding matches.