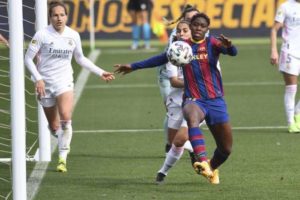 In Barcelona’s last league game against Rayo Vallecano which they won 7-0 Oshoala was on target twice.

Alexia Putellas opened the scoring for Barcelona on 14 minutes while Jennifer Hermoso made it 2-0 in the 23rd minute.

Real Madrid’s goal was scored by Olga from the penalty spot with nine minutes left in the game.

Oshoala has now scored four goals in her last two games and has taken her tally to 11 goals in 13 league games this season.