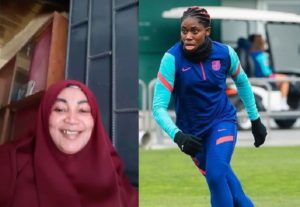 Super Falcons captain, Asisat Oshoala, on Sunday, announced the death of her “mummy”.

The 26-year-old, who also plays for Barcelona Ladies, made this known in a video posted on her Instagram page on Sunday night.

She said, “I still find it difficult to accept but this is my reality Allahu Allah. Mummy, I’m so short of words right now…

In an emotion-laden tone, Oshoala promised the late “mummy” that she would chase all dreams for her.

“I’ll still chase every damn dream for you, mummy. May Allah accept your return, eliminate your grave and forgive your shortcomings and make us reunite in Janah Firdaus. Amen,” the footballer said amid tears.

“Had two mothers, now I’m left with just one,” the player also wrote on her Instagram status.