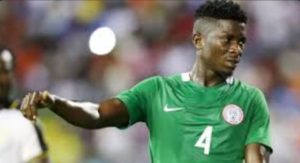 Flying Eagles midfielder Afeez Aremu has been ruled out of the ongoing  2019 U-20 Africa Cup of Nations in Niger Republic due to injury.

The injury will keep Aremu out of action for two weeks.

The 20-year-old former Akwa United and Sunshine Stars player will now miss Wednesday’s semi-final clash against Mali and the final of the competition should the Flying Eagles advance.

Aremu started the Flying Eagles’ opening two games against Burundi and South Africa before he was dropped from the starting line-up for the final group game against Niger.

Meanwhile, the Paul Aigbogun led side have qualified for the 2019 FIFA U-20 World Cup in Poland following their 1-0 win over hosts Niger in their last Group A match on Friday.

Nigeria finished top of Group A with seven points while South Africa placed second and advance to the semi-finals.