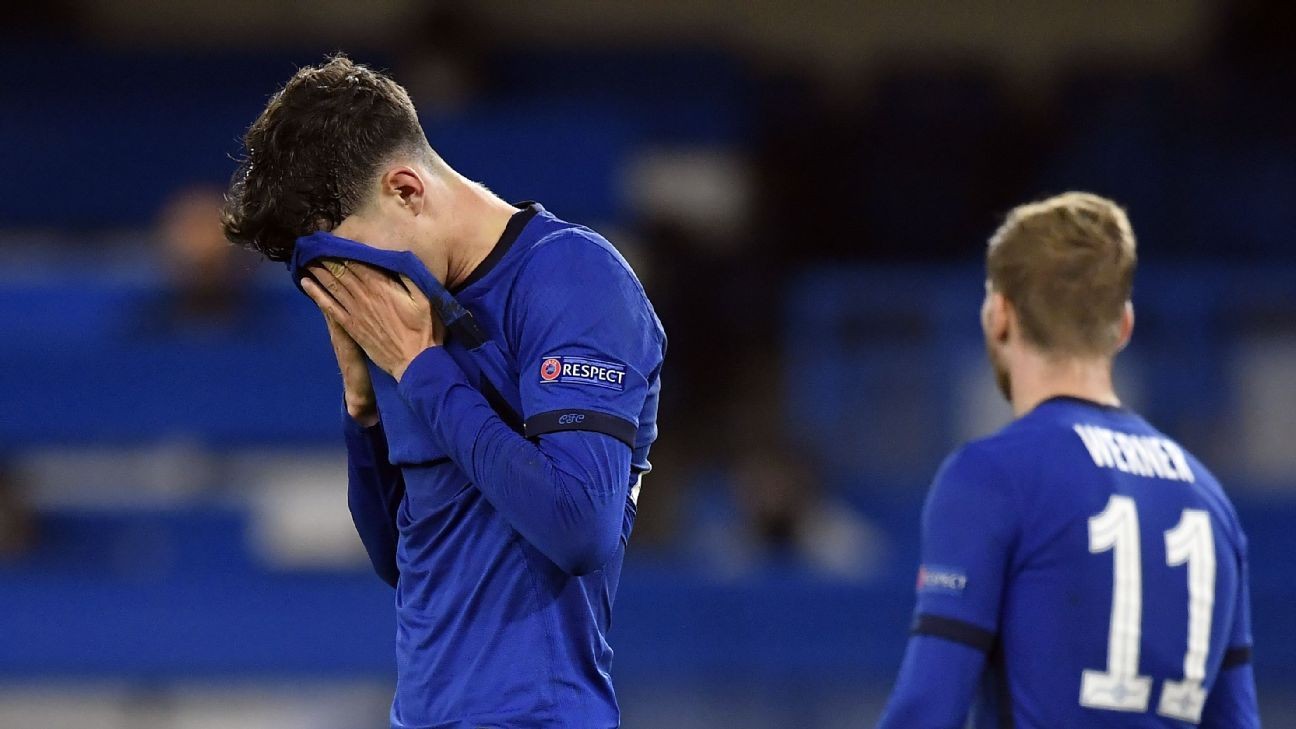 In the same way that Chelsea's transfer ban eased expectations on manager Frank Lampard during his first season in charge, the club's £220 million summer outlay is a key reason why he now finds himself under pressure.

Lampard knows from his 13 years as a player in west London that Stamford Bridge is an unforgiving place for any manager. Of the 12 men appointed since owner Roman Abramovich bought the club in 2003, only Jose Mourinho (212 games, in two spells), Antonio Conte (76) and Carlo Ancelotti (76) have taken charge of more Premier League games for Chelsea than Lampard's 55.

How does Lampard compare to Chelsea managers under Abramovich?

Lampard's position at the vanguard of the most successful era in the club history -- not to mention being their all-time record goal scorer -- should buy him more time than most in the role, but history tells us the clock is ticking.

The club initially responded well after letting talisman Eden Hazard join Real Madrid for €100m in 2019, with Lampard successful integrating several youngsters from the club's academy to secure a top-four Premier League finish in his first season. Yet Saturday's trip to relegation-threatened Fulham sees Lampard needing to improve a dismal run of one win from six league games, which has increased speculation over his position as the club sit in ninth place, fully 10 points behind the leaders.

There is a sense in some quarters that while teams naturally take time to mould, a more experienced manager would be getting more out such an expensively assembled group in the short-term. But given that the £220m acquisition of six players this summer was designed to make a repeat of last season the minimum aim, how have the new boys performed to date?

Kai Havertz has struggled to live up to expectations. Photo by Toby Melville/PA Images via Getty Images

The 21-year-old arrived with a lofty reputation and a price tag fractionally under the club's all-time record fee of £71.5m (spent on goalkeeper Kepa Arrizabalaga in 2018), but Havertz is yet to live up to either in the opening months of his Chelsea career. There are mitigating factors, not least adjusting to a new league, but also contracting COVID-19 in November to the extent he missed several weeks of training. But Havertz's difficulties seemingly encapsulate the conundrum Lampard is so far struggling to solve.

Clubs invariably don't spend such a huge sum on one player and then try him out in a number of positions, but Havertz has perhaps been experimented with more than any other player. It is something he's used to, switching between roles as false No. 9, a No. 10 or a right-wing berth for Bayer Leverkusen, but in a tougher league with the chopping and changing of personnel around him, Havertz is yet to look at home.

Lampard's formation switch from 4-2-3-1 to 4-3-3 removes the No. 10 position as an option and a deeper central midfield role is not producing Havertz's best form, not least because it requires him to perform more defensive duties. The German is now the most expensive piece of a puzzle Lampard is trying to solve, namely how to fit all his attacking players into the same team and form a cohesive unit.

Time is on Havertz's side to develop as a player but it is Lampard's responsibility to help create the best opportunity for him to thrive.

Chilwell has arguably been the most successful of the summer arrivals, missing the first four games in all competitions through injury, but an ever-present in the Premier League since Oct. 3.

The left-back position was quickly identified by Lampard as an issue with Marcus Alonso and Emerson Palmieri both inconsistent; Cesar Azpilicueta adapted well to a position change, but as a right-footer with limited ability in the final third, he was not able to provide the width and attacking threat from deep in tandem with Reece James on the opposite flank, something the Chelsea boss values so highly.

Chilwell has two goals and four assists from 14 League appearances and even in their comprehensive defeat to Manchester City on Jan. 3, the 24-year-old still showed enough endeavour to provide more crosses from open play (six) than any other Chelsea player. He is often their most potent threat from wide positions and sources have told ESPN that Chilwell has quickly become a popular member of the squad, with Lampard hailing his attitude behind the scenes.

play1:39 Michallik: Werner should be benched at Chelsea

There has been a degree of revisionism surrounding Werner during a run of 12 games without a goal that finally ended against Morecambe in the FA Cup last weekend. Those who cite the 24-year-old as an unqualified failure forget the fine start he made to the campaign, amassing eight goals and three assists from his first 12 games.

Werner turned down the chance to play for Leipzig in the delayed Champions League quarterfinals so he could begin life in London as early as possible this summer, with that work initially paying off. However, a loss of form has gradually reached alarming levels, underlined by a catalogue of shocking misses which leave him resembling a shadow of one of Europe's most promising forwards.

The Germany international admitted struggling with the physical intensity of Premier League football yet he has started all but one of Chelsea's 17 League games. Whether or not a break is required, Lampard needs to find a way to reignite the man who initially seemed most likely to reinvigorate their attack.

Ziyech was a key figure in Chelsea's nine-game unbeaten Premier League run before his injury absence coincided with their present slump. "It is not a coincidence," Lampard said. "We can't rely completely on him. He was very effective of us in terms of creation and goals. It helped, we were very fluid until he got injured."

Ziyech played 64 minutes against Manchester City and although the 27-year-old was unable to arrest the decline, his return will give Lampard hope that an upturn is around the corner. Ziyech's delivery from deep, cutting in from the right and bending a cross with his left foot, is almost undefendable when he is in form. Morecambe witnessed that first-hand in last weekend's FA Cup third round clash, but he will need to repeat that against more celebrated opponents in the weeks ahead.

Injuries have curtailed Ziyech's progress as he picked up a knee injury in a preseason game at Brighton and has been restricted to a total of just nine starts in all competitions, but keeping the Morocco international fit could be vital for the challenges ahead.

Edouard Mendy is definitely an upgrade on Kepa. Getty

Mendy initially brought a sense of calm to a goalkeeping position that had appeared increasingly calamitous while Kepa was playing. Mendy arrived desperate to make up for lost time at the highest level, having feared in 2014 that his career was over after being released by Cherbourg and spending a year without a club. The Senegal stopper immediately kept three Premier League clean sheets and established himself as Chelsea's No. 1, with Kepa making just two appearances since Oct. 17.

Mendy has kept six League clean sheets in total -- a record only bettered this term by Emiliano Martinez (8) at Aston Villa, Southampton's Alex McCarthy (7) and Manchester City's Ederson (7). Legendary Bayern Munich goalkeeper Manuel Neuer labelled Mendy "world class" last month, but errors have crept into his game of late: rushing off his line too quickly against Leeds, when it ultimately didn't matter as Chelsea won the game, but also against Everton, when it did.

He still represents an improvement on Kepa, but Lampard must hope his dip in form is merely a blip.

Thiago Silva's experience has helped, but Chelsea are still struggling at the back. Photo by Marc Atkins/Getty Images

Signing Silva was something of a gamble given he turned 36 in September. Nobody could doubt his pedigree, winning seven Ligue 1 titles at Paris Saint-Germain while amassing 88 caps for Brazil, but there were inevitably doubts about his ability to cope with the pace of Premier League football at this late stage of his career. Such concerns were heightened when a dreadful error on his league debut helped West Brom race into a 3-0 lead but just as Chelsea recovered from a slow start that day to draw 3-3, Silva quickly established himself as an influential presence in Chelsea's backline.

Chelsea have shipped too many goals of late but Silva still emerges from the first half of the season in credit, not least because he appears to have helped centre-back partner Kurt Zouma discover a new level of consistency alongside him. There has been talk of Chelsea taking up an option to keep Silva for a second season -- a clear indication of the regard in which he is held -- but ultimately he will be judged on the team's defensive record and there is considerable room for improvement after their recent run.