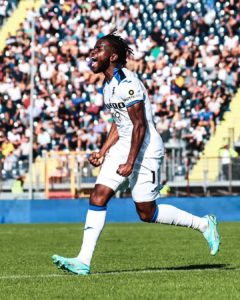 Super Eagles and Atalanta BC forward, Ademola Lookman have been rewarded with the player of the month award for his fine performance in November.

The news of the 25-year-old Nigerian winning the award was revealed by his club via their social media handle.

According to the club, the Super Eagles forward was voted by the fans who overwhelmingly picked the 25-year-old as the best player for the club.

"Who else but Mola," the club stated on their website. "Lookman has been awarded the Player of the month for November as well."

"You've been called on to vote and as usual, you answered our call in large swathes," the club added.

The poll was created using data from the ItalianOptic app, which is the initiative’s official sponsor.

Lookman who emerged winner of the same award in the tenth month of the year beat Denmark’s Joakim Maehle to claim the award.

Giorgio Scalvini finished in third place as the black-and-blue wonderkid solidified his spot as the centrepiece of Atalanta’s starting XI with his consistently dependable and excellent performances.

He scored two goals in the month under consideration against Napoli and Inter Milan, increasing his tally to seven thos season.