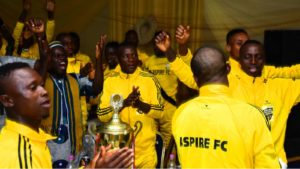 The yearly contest which lasted for four weeks, was aimed at bringing together two things many Nigerians are most passionate about: football and music. It created an opportunity where grassroots Ogene singers from various communities competed amongst themselves for creativity.

The voting was conducted online on Aspire FC’s Facebook page where videos made by the singers were rated by the public. The contestants were eliminated down to six who participated in last Sunday’s finale.

The finale, an exclusive event hosted at Marble Arch Hotels, Awka, was graced by top Nollywood actors, including Yul Edochie and Bob-Manuel Udokwu, who were part of the judges. 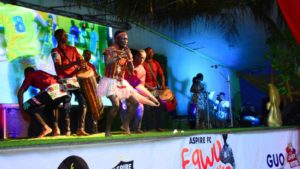 Also in attendance were government dignitaries and many football-loving business moguls.

The event organised by Spine Communications limited and sponsored by GUO Transport, New Age Mobile Concepts and Ojiofor Arts and Crafts, was quite tech-responsive and allowed viewers from all over the world to join in the three-hour-long, electrifying event online via Aspire FC Facebook page and Elegbete online radio platform.

The club is currently the Anambra FA champions after beating Ifeanyi Ubah FC in the 2019 Anambra FA finals.