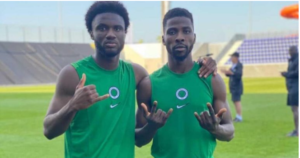 Iheanacho linked up with his teammates in camp on Wednesday.

22 players are now in the team’s camp with two more expected.

The former Manchester City player is expected to be part of the team’s training session later today.

The two other players, Francis Uzoho and Ebube Duru are also expected in camp today.

THE 22 PLAYERS IN CAMP