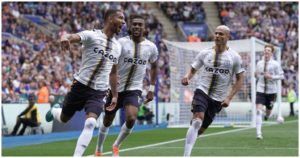 Everton climbed out of the Premier League relegation places by holding on for a hard-fought victory over Leicester City at King Power Stadium.

A stunning volley by Vitaliy Mykolenko and Mason Holgate's header gave Frank Lampard's side their third win in five games and ensured they remain in control of their destiny with four games to play.

The unmarked Holgate was quickest to react after Kasper Schmeichel kept out Richarlison's initial header from a corner to restore the Toffees' lead after 30 minutes.

Forced to chase another equaliser, Leicester dominated for large periods in the second half - but they found England number one Pickford once again in inspired form.

Having made one of the saves of the season against Chelsea last Sunday, the Toffees goalkeeper produced sublime stops to deny Nampalys Mendy and Harvey Barnes to protect his side's narrow lead.

Everton moved up to 16th with victory, one point above Burnley and Leeds United, who lost 2-1 at Arsenal to drop to 18th.

The Toffees have played one game fewer than their relegation rivals.

"We had a plan and the players stuck to it, no matter what happened, no matter if they scored," Lampard told BBC Sport.

"It's far from done, but the players can be really happy with what they've done on the pitch today. We should enjoy the result - but we're by no means safe." Everton began last Sunday a concerning five points behind Leeds and Burnley but, roared on by the Goodison Park crowd, recorded a crucial victory over Chelsea to stay within striking range of the sides above them.

Now, consecutive league wins for the first time since September - accompanied by defeat for Leeds at Arsenal and Burnley's loss to Aston Villa - mean Lampard's side will have the chance to go four points clear of them at already-relegated Watford on Wednesday.

The visitors, who had taken just six points away from home all season, made a nervous start in defence and Mina executed a superb sliding block to deny Daka after only two minutes.

Withdrawn midway through the first half because of injury, Mina was at fault as his header back towards goal was pounced on by Daka - a mere 15 seconds after Abdoulaye Doucoure had seen his shot pushed onto the post at the opposite end.

But the visitors responded positively to the setback as Holgate capitalised on the Foxes' well-known weakness from set-pieces - despite Schmeichel's best efforts.

Midfielder Anthony Gordon typifying the fight and determination that has underpinned Everton's recent upturn in form with driving runs in an attempt to ease the mounting pressure in the second half.

Alex Iwobi and Everton will now be looking to get 3 points against already relegated Watford on Wednesday to cement their place in the premier league.