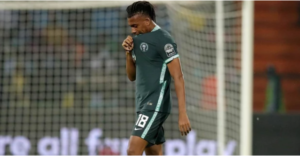 Super Eagles midfielder Alex Iwobi has opened up on his 2021 Africa Cup of Nations (AFCON) experience and how it fuelled his resurgence at his club side, Everton.

Iwobi was part of the final 23-man Super Eagles squad that travelled to Cameroon for the 2021 AFCON in January 2022 under the tutelage of coach Augustine Eguavoen.

The Everton player had a sour ending to the tournament, receiving a red card a few minutes after he came on in the Round of 16 fixture against the Carthage Eagles of Tunisia.

Iwobi was able to get back his best performances post-AFCON, going on a run of matches that helped Everton beat the relegation battle of the 2021/22 Premier League season.

In an interview with The National, the Super Eagles star revealed that he used his frustrations from the AFCON to motivate himself when he returned to his club side, Everton.

Iwobi said: “I was having a bit of a difficult season and didn't have the best Afcon experience, so I used that to make me motivated and get myself hungry [again]."

Iwobi stated that the arrival of former Chelsea manager Frank Lampard at Goodison Park gave him the fresh slate he needed to reinvent himself and improve his performances at Everton.

“Coming back to a new manager and him speaking to me made me feel like it was a fresh start almost," Iwobi explained.

"That goal against Newcastle was hard work building up before that and a bit of a reward. But it's in the past now. I just have to try and keep it going.”

Iwobi went on to make 32 appearances for Everton in all competitions during the 2021/22 season, scoring a total of three (3) goals.