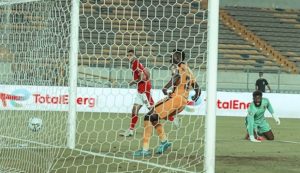 Akpeyi kept his place in the lineup after his heroics against Wydad Casablanca in the semifinals, but he could do nothing to prevent the three goals Chiefs conceded on Saturday night.

Chiefs were the underdogs going into the final, but they matched the Egyptian giants in the opening half of the match.

However, it all changed in the added minute of the first half as Happy Mashiane was sent off following a VAR review for a dangerous tackle.

Although nothing could separate the sides at half-time, Al-Ahly made their numerical advantage count after the break, scoring three goals to win a record tenth title.

Pitso Mosimane’s men took the lead in the 52nd minute through Mohamed Sherif, who latched on to a through ball from Akram Tawfik to chip the ball over an onrushing Akpeyi.

It got worse for Chiefs as Mohamed Magdy Afsha’s brilliant curler from outside the box in the 64th minute doubled Al-Ahly’s lead.

El Solia then scored a replica of Afsha’s goal ten minutes later to round up a dominant performance for Mosimane’s men.

With the game secured, Mosimane made a raft of changes, including Nigeria’s Junior Ajayi for the scorer of the first goal Sherif in the 90th minute.

The South African tactician has now won his second CAF Champions League crown after leading Mamelodi Sundowns to victory in 2016.