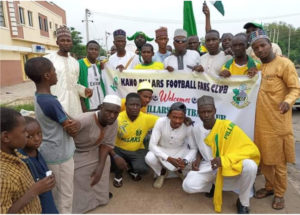 One thousand supporters drawn from each of the 44 local governments in Kano state have been recruited to cheer Pillars to victory at this year’s final of the Aiteo cup schedule to hold in Kaduna.

The chairman, Kano Pillars Fans club, Bashir Muazu (Jide) disclosed that preparations to move the fans to Ahmadu Bello stadium, venue of the final match have been completed.

He though expressed fear over the presence of a huge crowd at the game, he said the situation might be uncontrollable, “we had similar experience in Lagos, where those who were just sympathetic to our course, misbehaved and the football authorities tagged them to be members of our fans cub and punished us for their erring.

“We want to state categorically that, we are aware ABS is a 30,000 seating facility, we have registered fans that are going to Kaduna and they are humble and law abiding.

“There are other thousands unregistered sympathizers, beware some would even trek to Kaduna for the game, this we cannot control, but we are appealing to our sympathizers to always comport themselves in line with the spirit of fair play,” Bashir appealed.

He further said “we lost in the final last year to Enugu Rangers, this time, we have worked hard, we must commend the players and coaches for a job well done, we have a continental ticket in our pocket and we will ice the cake with the coveted FA Cup trophy