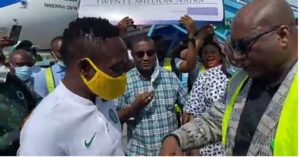 Captain Ahmed Musa who led Super Eagles to a 2-1 victory against Cape Verde on Tuesday has said that the team was inspired by the unity speech of Allen Onyema, the Chairman of Air Peace.

Musa said that it was good that Onyema fulfilled his promise of N20 million reward to the team, but insisted what pushed their determination to win the match for Nigeria was the speech of Onyema onboard the Embraer 195-E2 aircraft at the Murtala Muhammed International Airport (MMIA), Lagos when the team was departing for the match.

The Air Peace Chairman had charged the players to play for Nigeria’s unity and reminded them that football is one key factor that brings Nigerians together, adding that during the game the citizens forget their differences, tribes, religions and identify with their country.

Onyema also told the players that they have an enormous responsibility, as fate has thrown on their young shoulders the burden of using their talent to rebuild that patriotic zeal that made Nigeria one.

“You are not only going to play football march, you are going to carry the aspirations and the hope of a nation that is almost in distress. Football is a unifying factor in our country. That is why we decided to key in to associate with you at this period in time because we want to restore hope to our nation,” Onyema had charged the players on their way to Cape Verde.

Musa said that when the players were one goal down they remembered the unity speech and became more determined to win the game.

The Captain, who also said he enjoyed flying the Air Peace brand new E195-E2 aircraft, thanked Onyema for his kind gestures towards the team.

Onyema while congratulating the players on the second win in their World Cup qualifiers campaign, charged them to also emerge victorious in their subsequent games.

He expressed delight that the Eagles did not disappoint the nation, adding, “We believe in your capabilities and have faith in you”.

“I am happy that you fulfilled your promise to the nation, knowing that you carry the aspirations of Nigerians on your young shoulders. When you were one-zero down, everybody was panicking. Everybody was praying. And you responded like lions and won the match. There were celebrations all over the country- North, South, East and West,” he said.

The nationalist implored the team to keep up the winning streak and continue uniting Nigerians with their pitch exploits.

He added that Air Peace believes in the team and will continue to support them to take Nigerian football to greater heights.